The downside of frequent releases

Nowadays we tell people to release often, to do continuous delivery or to do continuous deployment. Facebook for example does a release at least once a day (for a presentation about the Facebook release process, see here), Netflix does so at least once a week. The advantages are well-known and obvious, one of the most famous ones being reduced risk. But there are also disadvantages, which are rarely talked about. Since continuous delivery and deployment mostly focus on what advantages it has for us, as the developers, we tend to forget to check if customers do like it. And I have to say: As a customer I don't always like it. 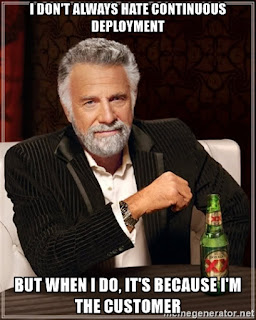 I don't mind CD (continuous d...) on websites like Facebook or Netflix, because as a customer mostly I don't even realize that there's been a release. But they drive me crazy when it comes to apps on my mobile devices. I know that I can activate automatic updates, but I don't do this mostly due to security reasons. I have often removed apps because at some point they wanted to have additional rights I did concur with (example: When an app suddenly wants to have access to my contacts but is not contacts-related at all).

Since I had a constant feeling of "update-spam" regarding my apps, I decided to track the data for almost 2 months (March 16 - May 7). I did so for my 2 mobile devices, 1 iPhone 5 running iOS 9, 1 Nexus 7 tablet running Android 6, writing down the number of updates, installed Apps and OS version usually every two days (I did not manage to do so every two days). The Nexus 7 had 94 apps installed the whole time, the iPhone 5 57, with 58 apps for a few days. These are the results:


You can find the spreadsheet with the full collected data here.

You could argue that 2 updates for every app in 2 months is not so much and you would be right. I have not collected data on this, but the amount of updates is not spread across all apps, as some of my installed apps' last updates date back to December 2015 or even back to March 2015.

I have a similar experience with the program FileZilla. I use it once in a while (maybe once every 1-2 weeeks) and almost everytime I open it, it asks me if I wish to install the latest update.

For me, as a customer, having 2-3 so many visible(!) updates is really unbelievably annoying. Therefore my advice would be: If you plan on releasing often, also take into consideration what kind of product you have. Last but not least, try to make your updates as silent as possible.
Posted by Dominik at 2:42 PM