A while ago, I conducted a workshop about agile estimation. In this workshop, I showed the participants three (of many) different ways of estimation: Planning Poker, Magic Estimation and the Team Estimation Game.


Planning Poker [Interaction level: high]
Probably the classic estimation method. The product owner reads a user story, the team estimates using the planning poker cards. If there are any differences in the estimation, the team starts a short discussion about everyones different opinion of the story at hand. If after about 3 estimation rounds there is still no consensus, the story is obviously not clear enough and everyone tries to gather new information until the next estimation session. Planning Poker usually uses story points, although I've already seen cards with animals on it (quite a nice idea actually). The estimation session ends when either all the stories are estimated or when time is up.
At the workshop I let the participants estimate what it takes to clean a kitchen. During estimation the team realized, that story #1 and #4 are too large and split them up to 2 and 3 stories. 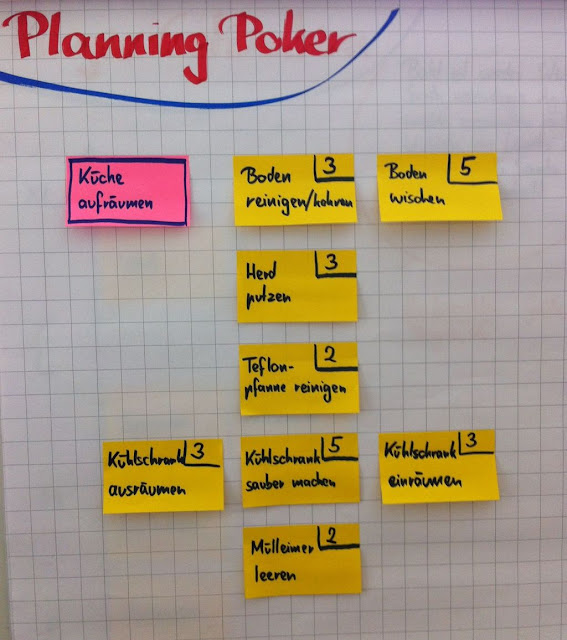 Magic Estimation [Interaction level: low - medium]
Probably the second classic estimation method. Prepare a flipchart (or similar) where you draw an arrow going up (symbolizing the increased complexity) and write your references beside the arrow, be it user stories, T-Shirt size or whatever you feel most comfortable with. The product owner reads a user story, writes it on a post-it and puts the post-it on the flipchart. This procedure is repeated for about 5 stories. The team then gets 2 minutes to stand in front of the flipchart and silently move the post-its to where it thinks they belong. If during the 2 minutes you realize, that a story is wandering around a lot, you might want to talk about some details after the 2 minutes. This whole procedure is repeated until there are no stories left or the time is up.
At the workshop the result looked like this: 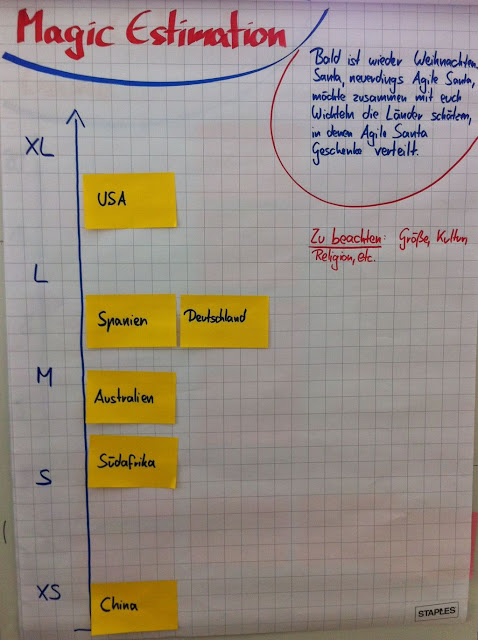 Team Estimation Game [Interaction level: low]
An estimation method I found a while ago here (page is in german) and have used at the workshop myself for the first time. This method is quite similar to magic estimation. As with magic estimation you need a flipchart prepared. The product owner brings all the stories on index cards to the estimation and lays them, heads down, on a table. Someone from the team (whoever wants to go first), takes the first story card, reads it out aloud and then puts it on the flipchart where ever he/she thinks it belongs. Now the second one in the team pulling a card can either put it besides, above or below the first story read. From the third story on, every team member has 3 possibilities for his move: 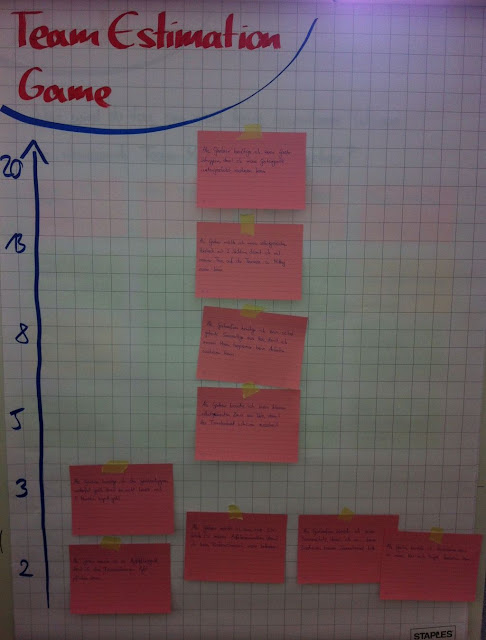 Conclusion:
In my time as a developer I only used planning poker (apart from any workshops or similar I attended). After having conducted this workshop, I still prefer planning poker over magic estimation and team estimation, since the interaction with planning poker is way higher than with the other two (which is also the conclusion of the workshop participants). That doesn't render magic estimation and team estimation totally useless, there are still valid use cases for them. They are actually quite useful when you need a lot stories estimated in a short time, e.g. at the beginning of a project. Other than that my favorite remains planning poker.
Posted by Dominik at 2:08 PM