Why the Shenmue 3 kickstarter campaign is a smart move

About a week ago during Sonys press conference on the E3 the kickstarter campaign for Shenmue 3 was revealed. There has been a lot of criticism ever since, mostly stating that this is the new "pre-order bonus" in the gaming industry. Being a gamer myself, I am not really fond of all the pre-order bonuses aswell as the DLC strategies applied for many games. Let me tell you why I think the Shenmue 3 kickstarter campaign was actually quite a smart move.

The risk of Shenmue 3

Despite high critical acclaim Shenmue 1 and 2 were not too succesful regarding sales according to various statistics (see here, here and here). The first installment is even considered a commercial failure and had a total cost of about 70 million US$. Remember that this was back in 1999. Final Fantasy XIII, which came out 10 years later, had a total cost of about 65 million US$. Furthermore it is now already 14 years ago that Shenmue 2 came out for the Dreamcast and Xbox. In the meantime we've seen the rise of Call of Duty, Grand Theft Auto III, IV and V, Dota 2, League of Legends, World of Warcraft and Final Fantasy XI - XIV. Meaning there are a lot of new games and game series that are consumed by the gamers. These factors add up to a high risk for a possible third installment of the series. Former Sega producer Stephen Forst confirmed this in a few tweets from 2013 stating that the risk was to high and that the brand awareness is probably rather low.

The Kickstarter campaign as MVP

So when they (meaning Sony and Suzuki Yu) started the Kickstarter campaign they actually created a minimum viable product. Other than a simple community vote they found actual customers who are willing to pay money in order to be able to play Shenmue 3. For Sony, who were in from the start (although stating otherwise in the beginning) the successful funding of the 2 million US$ Kickstarter campaign within the first 2 days was reason enough to count the MVP as successful and to officially support the game as publisher, partner and stakeholder. Given the "official" definition of an MVP they have done everything right:


Once the MVP is established, a startup can work on tuning the engine. This will involve measurement and learning and must include actionable metrics that can demonstrate cause and effect question.


The pros for the gamers

Even though there are other voices saying that the campaign is just another kind of the pre-ordner madness in the gaming industry, I think this is not the case. First, other than when pre-ordering a game I don't have to pay the full price. The lowest pledge that contains a digital copy of the game is $29: Furthermore not only will the gamers get frequent updates on the game progress but from the lowest pledge on the supporters already have the possibility to influence the direction of the game: 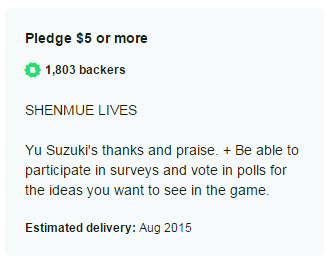 I understand that gamers are fed up with all the pre-order madness and the DLC strategy of today publishers. Nevertheless I think the that Kickstarter campaign is a good thing. For Sony it is a definitive proof that given the risks there seem to be enough gamers willing to pay. For us gamers it is a possibility to get a game we want and even influence parts of it.
Posted by Dominik at 11:55 AM